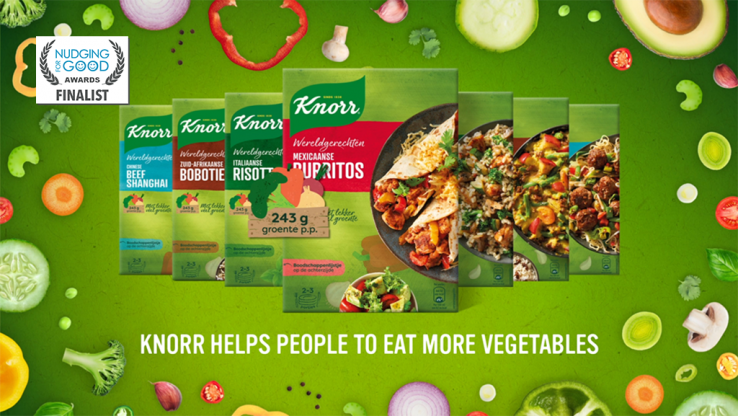 The Dutch are on the bottom of vegetable intake in Europe. While the recommended daily amount by the government is 250 gr, their average daily intake is 131 gr. Dutch consumers have a routine based diet, with too much carbs and animal protein and a lack of veggies. They are willing to eat more healthy, but they lack the skills, time and inspiration to eat more vegetables.

The Nudge operates via the execution of logos on the front of the pack of all Knorr Meal Kits range (the core range of the brand). This logo reminds consumers about eating the recommended amount of veggies and links to the suggestion of two new ways of cooking the recipe (besides the traditional one):

1. With lots of veggies: preparation with more than 200gr per portion.
2. Day without meat: a fully vegetarian way of cooking the recipe.

This new logo on pack communicates to people that by following the cooking instructions they will eat more vegetables and it guides people to make eating more vegetables the easy step. This is achieved through a redesign of the choice architecture; the veggie recipe being the most prominent and detailed on the pack which facilitates the ability to change habits by providing information on alternatives on-pack. This is then reinforced via activations on website and social media, via recipe inspiration with lots of veggies on google search, in-store activations near vegetables and via advertisements.

Knorr reworked cooking instructions for 40 Meal Kits to allow Dutch consumers to be able to intake at least 200 gr of vegetables per portion. With 23 million packs sold last year and each pack containing 2-3 portions, this nudge has had an impact on circa 50-75 million meals in the Netherlands. Research proves that 50% of consumers have tried the new recipes. Retailers also embrace the Nudge by offering bundles in store and online with the meal kits and lots of veggies.