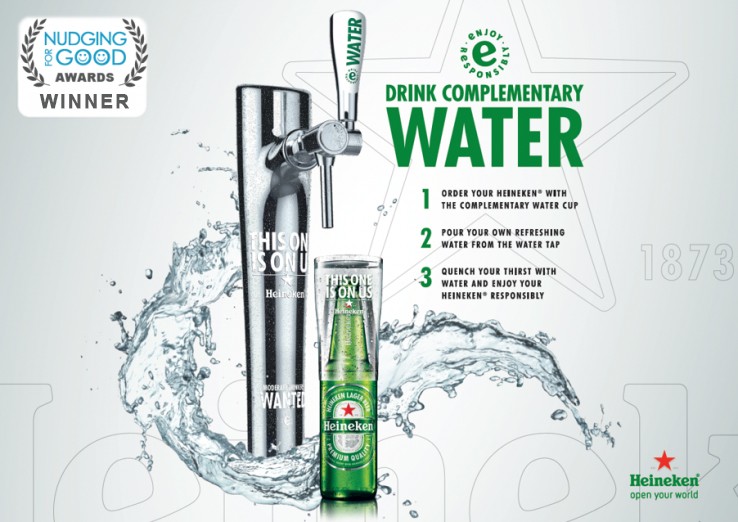 Heineken – This one is on us

Most people know drinking water on a night out helps them moderate their alcohol intake, stay in control and avoid the effects of overdoing it. But the social stigma of drinking water when out with mates often stops them. To nudge people to drink responsibly, Heineken had to make moderation cool and put water at the heart of every great night out.

Heineken has long promoted responsible drinking but we wanted to go beyond talking about it and offer a real solution.

So, we set up Talent Lab, a hothouse of innovation in our Amsterdam HQ attended by top young creative minds from all over the world. Their challenge was to come up with an idea that would appeal to the Millennial generation and inspire them to drink responsibly. In other words, they had to make moderation, and water, cool.

The result? This One Is On Us.

Launched “en masse” at the Holland Heineken House at the Rio Olympics, the idea was brilliantly simple. To make it quicker, easier and trendier than ever for people to drink water on a night out, we gave them a complementary cup that fitted neatly on the neck of their beer bottle each time they bought a Heineken. They could then fill it with water from a beer-style tap at the bar – on us. No waiting, no paying, no searching and no big fuss. Just a cup of water with every beer and the ideal way to enjoy Heineken responsibly. Suddenly, rehydrating became a fun part of getting a round in. Who doesn’t enjoy pulling a drink from a beer column?

The recyclable, re-usable cups will now roll out globally, starting with each Heineken office, then at Heineken events and in like minded bars and venues worldwide.

At last, the social stigma around drinking water on a night out has been debunked and moderation is cool. The numbers don’t lie. We asked people if they would have water if served this way. 92% said yes. We asked them if it would help moderate their drinking. 80% agreed. So, that’s a night out that’s great fun and responsible. This One Is On Us.